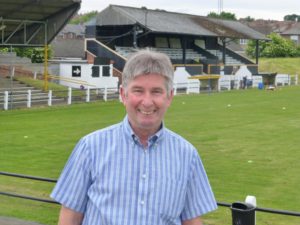 Crook Town AFC have made a number of monumental changes to its infrastructure both on and off the field. The first being the appointment of a new Chairman in the shape of highly experienced Northern League man, Vince Kirkup. Vince inherited a number of historical financial issues as well as logistical issues but by some minor miracle he has managed to put the club on an even keel going in to the 2016/17 Season.

The club also made major changes on the pitch with the permanent appointment of high experience Manager, Colin Myers, after a short spell as Caretaker Manager at the end of the 2015/16 season. He was previously with Blyth Spartans when they reached the FA Cup 3rd round (proper), losing 3-2 to Birmingham City after leading 2-0 at half time. Before that he led Bishop Auckland to the Durham Challenge Cup after beating local rivals Spennymoor Town 2-1 in the final. At Crook, Colin was tasked with building a new squad as well as implementing a long term sustainable plan which would hopefully have seen the club regain its 1st division status. Myers commented at the time “I am under no illusions at the size of the task in front of me. It will take 3 – 5 seasons to get this historic club back on track and build the foundation that will take it forward. There are no quick fixes here and a lot of patience will need to be shown. However, given time, we will take the club forward.” Unfortunately, after a disastrous season which yielded 5 wins and 2 draws from 29 games, culminating in the heavy home defeats 6-1 to Billingham Town and 10-1 at Billingham Synthonia, Colin Myers was relieved of his duties on 22 December 2016.

The club appointed highly experienced and much travelled Wilf Constantine along with his assistant, former Crook town player, Neil Campbell, with the task of hauling the club clear of the relegation zone and ENL 2nd division safety. Wilf and Neil did a magnificent job with a 3-0 victory over Thornaby in their first game. This game included 7 new signings and took us on a run which yielded 5 wins, 2 draws and 6 defeats from their 13 games in a charge for safety. With ENL status established, the club reappointed the duo shortly after the end of the season. A busy close season has seen Wilf make some notable signings in further strengthening the team ahead of the new 2017/18 season.

The club is looking forward with greater optimism with the pre-season preparations complete. Some fine performances have seen the team win 5 of their 7 pre-season games, scoring 41 goals in the process. We look forward to a successful season.