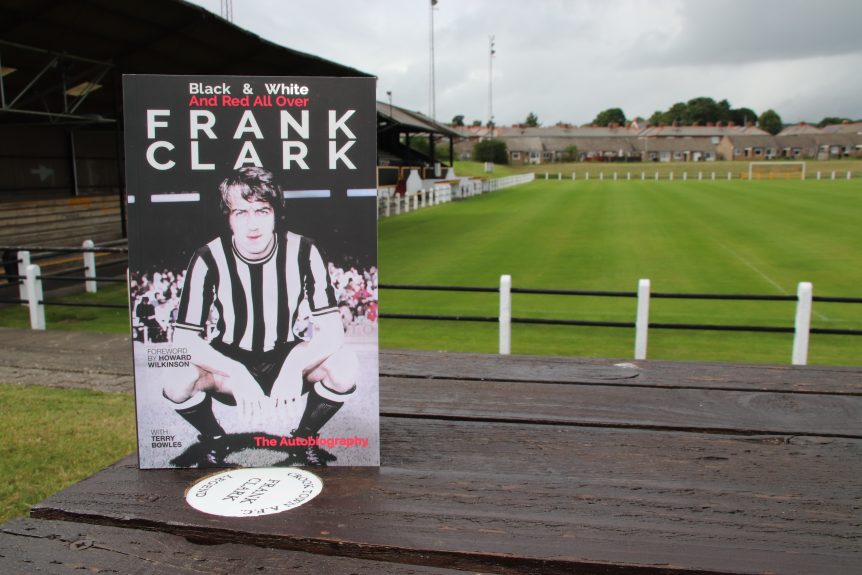 European Cup Winner and Black and Amber legend Frank Clark recently called into the Club whilst in the area during a torrential downpour to catch-up with Chairman Vince Kirkup and Club Secretary Paul Fowler.

Available at the Clubhouse bar for £5 (or by mail £3 P&P) Frank’s autobiography charts his career from his early days as an FA Amateur Cup winner with Crook Town to becoming Newcastle United’s most decorated player and winning the European Cup with Nottingham Forest
It’s 52 years since the ever reliable left back played in every game during Newcastle United’s triumphant Inter-Cities Fairs Cup campaign – and 42 years since he helped Nottingham Forest win the European Cup.

Black & White And Red All Over is a candid and nostalgic account of more than 50 years involved in the game. It tells the tale of life as a player in the Sixties and Seventies, working for the legendary Joe Harvey and Brian Clough, and also provides a fascinating insight into football from all angles.
The exclusive club of people who have served the same professional club as player, manager and chairman has less than a handful of members. Frank joined that elite list at Forest.
He played 486 League and Cup games for Newcastle, which currently puts him in fourth place in the club’s all-time roll of appearance makers.

Although he was heading towards his 32nd birthday when he moved to Forest, over the next four years he helped them win promotion from the Second Division, the League Championship and the League Cup (twice), before making his final appearance as a player in the European Cup Final win over Malmo.

He launched his managerial career as assistant to Ken Knighton at Sunderland, then spent 13 years with Leyton Orient before returning to Forest as Clough’s successor. He led them back into the Premier League and was crowned ‘Manager of the Year’ the following season when they qualified for Europe. His final stop in management was Manchester City.