The Curse of the Penalty shoot out

Crook Manager made a number of changes to the side that performed so badly against Hebburn on Saturday with Ian Maddison, Peter Brown and Ryan Cummings returning to the first eleven.

Crook started brightly and got at Bishops early doors with Nathan Plews cutting inside the full back and when a shot looked on he squared the ball to Daniel Mann who was forced away from the goal. Damon reaks was the first to test the Bishops keeper after turning his marker but narrowly shooting wide of the goal. Daniel Mann was next to test Pocklington after hitting an early shot from distance which skimmed the post. Bishops were also creating a number of chances but a fine goalkeeping Display from Niall Harrison was keeping them at bay. The best chance of the half fell to Bishops after Hoganson crossed in to the Bishops box to Winn who with the keeper still to beat side footed the ball wide for a goal kick.

The second half went much the same way with both sides attacking each other in which was an end to end local derby. Crook kept their shape very well with Joe Grant and Peter Brown proving to be a formidable partnership in midfield and when that line was breeched Ian Maddison and Mark Wood proved just as formidable. Along side that with Goal Keeper Niall Harrison in fine form and striker Damon Reaks looking ever dangerous up front the game became very tight with both teams not giving an inch and attacking each other at every opportunity giving the crowd of 190 value for their Money. The game finished 0-0 but this was far from a boring 0-0 with both sets of players giving their all for their respective clubs in what was a real exciting local derby.

Unfortunately Crook could not maintain that going in to the penalties. Bishops scored their first 3 and Crook missed their first 3 allowing Bishops to progress to the next round of the League Cup.

Crook Manager Colin Myers commented: “I was very proud of the players tonight. They gave their all for the football club and the supporters. I was especially pleased with the discipline and work rate and I am seeing some early signs that all the hard work on the training pitch is starting to pay off. What we now need to do is find some consistency in the players and our performances which is what we need to move forward”.

Man of the match: Niall Harrison 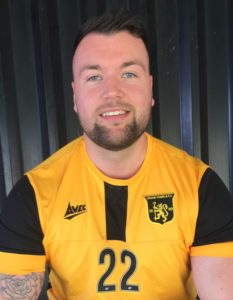