A new look Crook outfit found the first 45 minutes hard going in a midfield encounter with Ryton holding the edge after an early goal.
On seven minutes the home side never recovered from a defensive mix up by Kieran Megran and Adam Morley, the ball finding it’s way to the right, Josh Holland winning a race for the ball with Joseph Spooner, it looked like he’d over run the ball but the Crook defenders were slow to recover and as he reached the left side of the six yard area, his shot across Niall Harrison found the left corner of the net.
Joe Grant showed his frustration with a reckless tackle which resulted in the first booking of the season as Ryton were strolling through the game for the first forty minutes, then Callum Johnson put life into the Crook attack with his right wing play. The home side’s best chance of the half fell to Lewis Martin as he broke down the right but his wild shot was well off target when a cross might have been better.
The second half had Crook mainly camped in the Ryton half and it looked only a matter of time before the equalizer was on the cards. Megran and Johnson were combining well on the right Johnson passing to Martin who’s cross rolled along the goal line with no one close for a tap in.
A left wing corner by James Warnett was headed against the post by a Ryton defender,Johnson and Warnett were now running riot with a desperate Ryton defense. Martin was replaced by Peter Brown and three times in as many minutes he was wrestled to the ground by deperate Ryton defenders.
A left wing cross from Warnett to Megran had the wing back hitting the bar from a difficult angle. Johnson was again in the thick of the action his cross hitting a defender, for yet another corner. With time running out Brown had a shot blocked, a desperate Ryton hanging to three lucky points.

Crook manager Colin Myers said; “It was a poor start to the game, conceding early, and we took 30 minutes to settle. We played well in the second half and had more of the possession. We hit the bar and the post and missed a good 1 on 1 chance. Ryton kept a good shape and we couldn’t break them down.”

Man of the match Callum Johnson 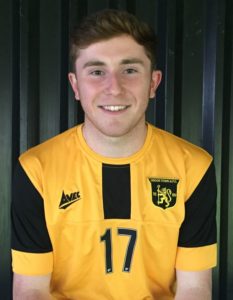