For the sixth game in the last 7 Crook failed to score.

Crook created the first chance early on as Easington failed to clear a cross meaning it fell to Daniel Smith in the box but his shot was blocked when really he should have done better.  Shortly after a ball into the Easington box saw Reaks fluff his shot giving the Easington keeper an easy save when he should really have scored. Easington’s first shot of the game came in the 9th minute but failed to find the target and with quarter of an hour played, a deep Dan Martin cross fell to Aaron Croft but the former Washington man was thwarted by a good save by Crook keeper Niall Harrison. Crook created another chance as some as quick flowing football gave Ryan Cummings possession for Crook but he could only drag wide when finding the target was a must. The bravery of Kyle Donaldson prevented Crook from a goalscoring opportunity in the 37th minute. Donaldson came rushing off his line to smother the ball just as Peter Brown looked to shoot. Easington came more into the game as the half wore on. Peter Jones was the instigator as Easington carved out a brilliant chance through some good passing football in the 43rd minute but a quick reaction save from Harrison kept the score at nil-nil. However, there was nothing Harrison could do about the next effort as Kenney gave Easington the lead in fine style. The former Spennymoor Town man collected the ball 25 yards from goal before unleashing a bullet into the bottom corner to give Easington the lead seconds before the half-time whistle.

The game was effectively over early in the second half. In the 17th minute a Redman free-kick eventually dropped for Renton and he bundled home to double Easingtons lead. Three minutes later, it was three as a ball was played across the edge of the penalty area finding Page who tucked the ball into the bottom corner from 20 yards.

The final 30 minutes proved to be a quiet affair with little goalmouth action. Damon Reaks and debutant David Vincent both tried their luck for Crook but were unable to find the target while substitute Joe Kerridge fired an effort which was blocked for Easington.

After the game Crook Manager commented “It’s very worrying how poor we are in front of goal of late. We are creating the chances but are simply just not taking them. A little bit of luck might help as well. We also seem to be having 10-15 minute spells in games where we press the self destruct button. The team are working hard but we need a bit more quality in key positions”

Man of the Match:  Joe Spooner 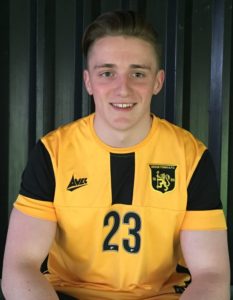