Crook shine in the Rain

Crook Town ran out 3-1 winners away to high flying Heaton Stannington with probably their best performance of the season.

Crook Town Manager Colin Myers was once again forced to shuffle his pack with suspensions to Peter Brown and Ryan Cummings and injuries to Kieran Maughan, Thomas Iley, Wayne Whitfield and Connor Hughes. Lewis Brown made his first start for a number of weeks after re joining the squad and Daniel Mann made his debut after signing for the club from Ryhope CW in mid week.

Crook started very brightly with Smith and Mann causing lots of problems in wide areas and the midfield three of Grant, Brown and Megran pouncing on every loose ball Crook quickly had Heaton Stannington on the back foot. With the Heaton Stannington players not being able to gain any sort of quality possession tempers began to fray and they picked up a number of bookings including their centre half Leighton. Controversy followed when after a goalmouth scramble the Heaton players claimed that the ball had crossed the line only for the referee to wave away their protests. Then on 39 minutes, Leighton who had earlier been booked clearly brought down Reaks who was about to shoot. The Referee immediately pointed to the spot but the deserved yellow card for the challenge did not appear which seemed to be a let off for the Heaton player. Kieran Megran stepped up and calmly despatched the penalty in to the corner of the goal. A minute before half time Crook should have scored again when Reaks was put clear on goal only to shoot straight at the keeper.

The second half was much the same as the first with Crook winning the midfield battle and the two wide men running Heaton raggered. In the 54 minute a trip on Smith by Leighton gave the referee no choice but to issue a 2nd yellow card and send the Heaton man from the field of play. From the resulting free kick the ball was played to Smith who hit a right foot shot hard and low in to the corner to give Crook a two goal lead. Things got better for Crook in the 58th minute when the referee awarded a second penalty to Crook as again Reaks was brought down in the box. However this time Megran went the same way and the keeper pulled off a good save. This seemed to give Heaton a lift as they swept forward in to the Crook box and with Maddison miss timing his tackle the referee pointed to the spot. Blackett stepped up to despatch the penalty and put Heaton back in the game at 2-1.  Crook continued to threaten on the break with Smith, Mann and Reaks looking ever dangerous and this paid off in the 87th minute when man of the match Reaks broke clear on the right and placed his shot into the far corner to win the game for Crook.

Man of the Match: Reaks 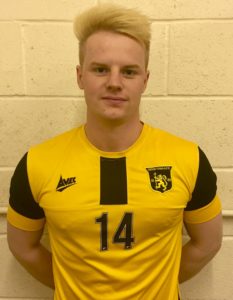