Crook Towns three game unbeaten run came to an end on Saturday away to Ryton.

Crook Town Manager Colin Myers was forced to make changes due to the suspension of Peter Brown and Sonny Andrews not being available but welcomed back Joe Spooner, Callum Smith, Connor Hughes and Wayne Whitfield back into the squad.

Crook started the game well but a stubborn Ryton side were making them work very hard. The game became a midfield battle with very few chances at either end in fact neither keeper had to make any saves during the first 45 minutes but Crook were the more dominant side in the opening half with wide men Callum Smith and Nathan Plews causing the Ryton full backs all sorts of problems.

Crook again started the half very well but Ryton flooded the midfield much the same as the tactic used in the first half. Ryton began to get on top as Crook got bogged down in the midfield battle and were unable to get the ball in to wide areas as much as they would of liked. When the did get the ball wide Callum Smith was causing the Ryton defence lots of problems. In the 60th minute a good run down the left wing saw Smith cut inside the full back and send a curling shot just wide of the far post with the keeper stranded. Another good run from Smith saw his cross flash across the face of the goal and if Connor Hughes had been more positive with his run would have been able to side foot the ball in to an empty goal. Then a great run on the right from Plews saw Hughes head the ball tamely straight at the goalkeeper when he really should have scored. Then on 65 minutes came the opening goal of the game. Thomas Iley failed to get close enough to the Ryton winger who was able to pick his spot with his cross and the Ryton centre forward planted a strong header past the Crook goal keeper,

That saw the introduction of Joe Grant for the injured Ryan Cummings and Lewis Martin for Ian Maddison and saw Crook change to a 3-4-3 formation in an attempt to get back in to the game. This nearly paid dividends immediately as a good run from Lewis Martin saw his shot come off the cross bar but Damon Reaks inexplicably put the rebound wide with the goal at his mercy. Crook then had a good shout for a penalty as the ever dangerous Smith drove into the box and seemed to be tripped by the Ryton full back only to see the referee give a corner despite some strong shouts from the Crook players.

From the corner Ryton played a long clearance to the left wing and with Iley not learning his lesson from the first goal allowed the Ryton player to cross the ball unopposed giving them another headed goal and effectively killing off the game.

Man of the Match: Callum Smith 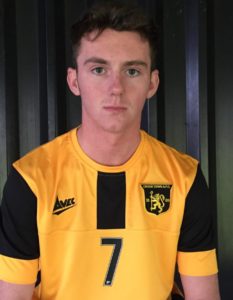