Crook Town Manager Colin Myers was again forced to shuffle the pack. Steve Malloy and Adam Morley both failed pre match fitness tests and with Connor Hughes, Calum Johnston, Niall Harrison and Kyle Swankie all unavailable it gave Peter Brown the chance to make his first start of the season.  The home team started brightly winning control of the midfield and the first chance of the game fell to Peter Brown who’s left foot shot was finger tipped round the post by McMahon
A corner was headed over the bar by Ian Maddison then on 21 minutes James Warnett made a great run into the  box resulting in a penalty for shirt pulling, Sonny Andrews stepping up to place the ball past McMahon
Crook were giving the hard pressed Alnwick defence a torrid time but they slowly fought their way back into the game, a pass from Peter Brown gave Daniel Smith a run at McPherson who cut out the cross giving away a corner, the home side failing to score the second goal when well on top.
Alnwick fought their way back into the game Jason Scotter saving a shot with his foot after a defensive mix up. After 39 minutes the equalizer, with Scotter off his line, a speculative lob by Dixon who had been allowed to run in to the box unmarked beat the keepers outstretched arms into the left hand corner of the net, buoyed by this Brooks headed over the bar the visitors ending half the the better side.
Alnwick started as they finished the first half, two scrambled clearances, two shots past both Scotters posts. Crook settled down the visitors were reduced to long shots outside the box. The storm looked over as the home side were attacking, Chris Renshaw with a headed inches over the bar.
The Crook defence was taking the sting out of Alnwick attack when Ian Maddison received an injury and had to be replaced. Crook took the lead when Smith and Warnett combined well on the left, Smith’s cross reached the outstretched left foot of the unmarked Ryan Cummings on the far post.
Crook gave away a needless free kick on the right, the kick met for a tap in on the far post by Riddell. The home side were now losing their defensive cool and gave away a penalty, two Crook players are booked, Brown slotting his kick home, Crook retaliate Lewis Brown shot though a crowd of players straight into the keepers hands. Anwick went two goals to the good, Scotter looked to be fouled as he went for a cross being pressed by two Anwick players, the resulting header nestling in the back of the net,
most refs would have said, “Foul,” this one didn’t, 4-2. Goal number five came as the Crook defence was all at sea leaving Brooks with a tap in. The rout ended as a raised hand gave away penalty number two then just before time Lewis Martin was sent off because of one word too many to the ref.
After the game Colin Myers commented “the turning point of the game was the injury to Maddison. We completely collapsed defensively after he went off. Some of the more experienced players need to have a long look at themselves as they are massively under performing at the moment. This is still very much a work in progress and I have said from day one it may take till Christmas to get a settled side firing on all cylinders but certain players are currently performing below the expected level”
Team. Scotter. Moss. Spooner. Turnbull. Maddison. Brown(P)  Cummings. Renshaw. Andrews. Warnett. Smith.Subs Brown(L) for Maddison Grant for Brown(P) Martin for Warnett
Man of the match: Ian Maddison 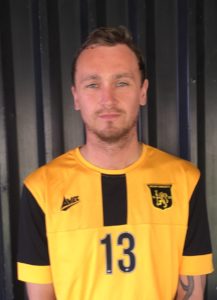