Before the game a minutes silence  was observed in tribute to ex Crook player and Northern League stalwart and all round sportsman Keith Hopper.

It’s not often a player  scores four goals away from home and ends up on the losing side but that’s what happened when Bedlington travelled to Crook. On a sunny afternoon with a strong wind and a firm pitch, Bedlington made the most of the conditions with a goal after 3 minutes, the ball floating on the wind over the Crook defense Johnathan Wright making the most of his luck when his left foot lob went over Liam Harrison’s outstreched hand into the corner of the net.

Worse was to follow on fifteen minutes as the wind helped with a second goal, Harrison handling outside the box after mistiming his jump saw the Crook keeper receive a straight red card. Lewis Brown took over in goal with Crook having no keeper on the bench, the resulting free kick form Wright squirmed under Browns body putting Bedlington 2 up.
The away side were now full of confidence but Crook came storming back and only a last ditch save from the Bedlington keeper stopped Crook form reducing the deficit. More disappointment was to follow for Crook when they were forced to make an early substitution when influential midfielder James Warnett had to  hobble off after a late challenge. At this point there seemed to be no way back for Crook but we were underestimating our new  team’s spirit.
Ryan Cummings made a determined start as sub as he combined well with Chris Renshaw in mid field, Crook slowly taking control of the game. Cummins was the instigator of the home sides first goal on 28 minutes with a defence spilting pass to Lewis Martin who made no mistake with a crisp right foot shot giving Mullen no chance. Straight from the restart Wright tried a shot from the half way line trying to outfox our rookie keeper but it was a foot wide, the home side ending the half the better team.
Stern words must have been said in the away dressing room at the break, they came out late, but they made little impact as Crook  dominated the early minutes and a deserved equalizer came on 57 minutes as Martin bent his right foot free kick passed the wall and keeper from the edge of the box making it 2-2.
Two minutes later Martin, Renshaw and Steven Malloy combined well down the right with Malloy’s shot going across Mullen into the far corner of the net. Ryan Cummings spoilt his good performance with a booking. Six minutes later it was 3-3, Wright outstripped the Crook defence to equalise and within 5 minutes he restored Bedlington’s lead making it 4-3 as Crook gave him too much room on the left and he fired past stand in keeper Lewis Brown.
In the 85th minute Malloy controlled a long ball from keeper Brown on his chest and slotted a pass to Martin who’s cross found Johnston at the front post beating two defenders to make it 4-4. Crook seemed to have grabbed a point against all the odds but more drama was to come. Following a good run down the wing, Malloy crossed into the Bedlington box where Andrew Ferrall handled giving Crook an opportunity to win the game right at the death. Lewis Martin stepped up and put a right foot shot into the left hand corner of the net to put Crook 5-4 up.
With only minutes remaining, Bedlington threw everything forward. Lee Scott headed over the bar and  from a high cross into the box, 3 Bedlington players crowded under pressure Brown who bravely tipped it over the bar when he ended up in the back of the net. To the dismay and frustration off all Crook players and fans, the referee found 8 minutes of added time but Crook fought hard to defend their lead. Crook had one more chance  when Callum Smith broke down the left but his shot was blocked.
Crook Manager Colin Myers said “It was a great performance by the lads considering the situation we found ourselves in after 15 minutes but they showed that they have a fighting spirit which hopefully will make us very difficult to beat especially at Millfield”
Team. Harrison. Megran. Spooner. Brown(L) Turnbull. Renshaw. Johnson. Grant. Martin. Warnott. Malloy.
Subs Cummins for Warnott. Smith for Johnson
Joint man of the match Lewis Martin (13)  for hatrick and Chris Renshaw (2) who ran the midfield 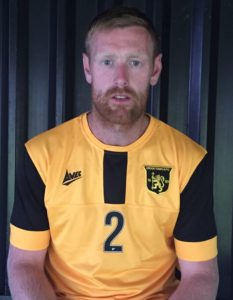 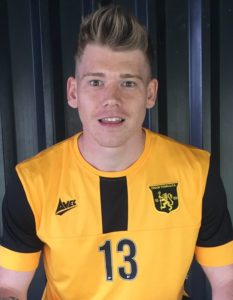