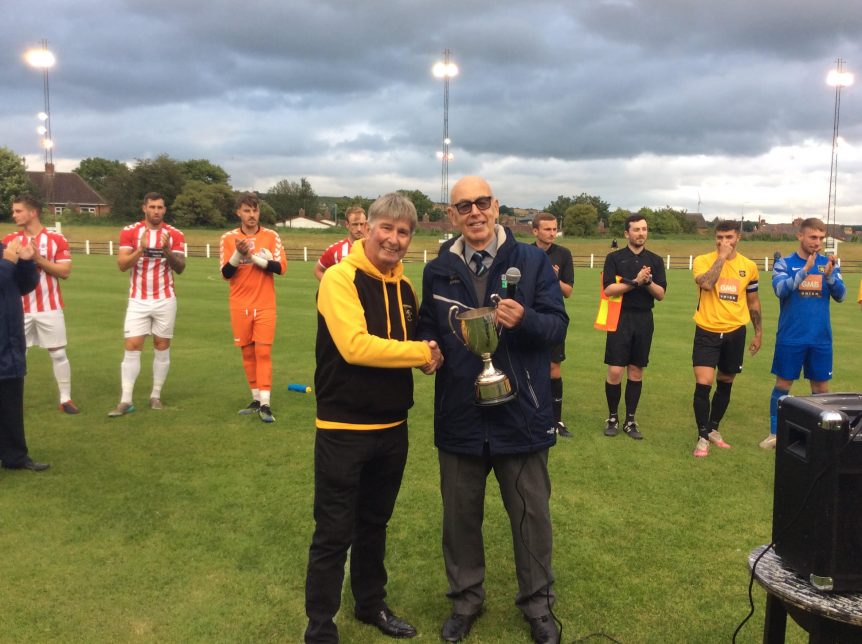 Crook chairman Vince Kirkup was tonight presented with the Arthur Clark Memorial Trophy after 50 years of involvement in non-league football.

Vince was presented with the trophy and a commemorative tankard by League President George Courtney in a surprise presentation before the club’s game against Seaham Red Star at their historic Millfield ground.

The Arthur Clark Memorial Trophy is presented to the person who has made a significant contribution to the league and non-league football.

George Courtney said:“Vince is the epitome of what it takes to be involved in non-league football and it marks the 50th anniversary since he first became involved as a player. It’s an honour to announce that Vince is the recipient of this year’s Arthur Clark Memorial Trophy. His commitment to the clubs and to non-league football is incomparable. While at Stanley United he was manager, secretary, treasurer, kit washer, commercial manager and groundsman…..not forgetting the rather unglamourous emptier of the portable loo. So tonight, we are delighted to present the Arthur Clark trophy and a commemorative tankard as a mark of the league’s appreciation and thanks for all he has done. Hopefully that will continue for many years to come too.

Vince started out as a player for Stanley United in 1971 where he also became manager. Since then he has been manager at Crook – where he lasted 42 days, less than Brian Clough’s infamous 44 days at Leeds.

He has also worked at Shotton Comrades, Brandon United, Esh Winning, Whickham and then, in 2015, he answered an SOS to become chairman at Crook. Since then he has guided the club back into the first division”